FAMILY HISTORY
After having made his fortune in Venice, my great-great grandfather Giacinto came to Polcenigo in 1900 and bought the most attractive building in the village. He left the house to his eldest son Giusue’ and the outbuildings of the castle to my great grandfather Domenico. 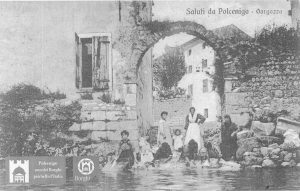 My great grandfather Domenico was a merchant like his father and administered his own property as well as having a shop in the village. Domenico died young and his daughter’s husband, my grandfather Galiano, bought the house in Via San Rocco for himself and my grandmother Norma. Up until the 20s, thie house had been used as a hotel, the Corona Hotel and had been frequented by many tourists who came there to spend their summer holidays. 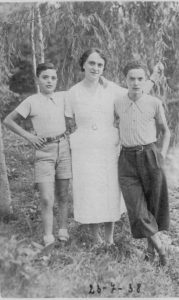 My grandfather Galiano became a bank manager when he was quite young but suffered financial ruin and was forced to sell the house. In order to provide for the family he left for Africa, and my grandmother Norma had to bring up two small children (one of them being my father) alone. In the meantime my aunt Jolanda who had worked for many years as a governess in Egypt came to live with her.

Norma had never worked in her life despite having a diploma as a primary school teacher from a college in Florence. Now she put her diploma to use and started teaching. Thanks also to the help of Aunt Jolanda, she was able to bring up her two sons and send them to school. My father went on to become a cardiologist and my uncle a state official.

Grandmother Norma was also able to buy back the house in San Rocco in the 50s after making considerable sacrifices and she put the house in her sons’ names. My father left the house to me and I treat it with great respect and affection because I know how many tears and how much determination went into its every stone. I would now like to share it with you by attempting to pass on way of life.